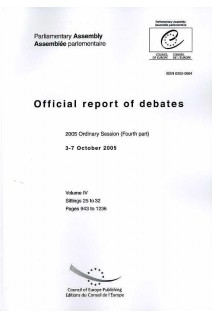 
 
This volume is a collection of verbal proceedings of debates of the Parliamentary Assembly of the Council of Europe at the fourth part of the 2005 Ordinary Session (3-7 October 2005).The Assembly meets four times every year (January, April, June and October).The Parliamentary Assembly's publications include, among others, Adopted texts, Assembly documents, and Orders of the day and minutes of proceedings.