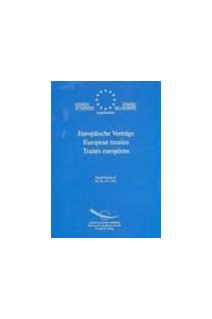 
 
Since its establishment in 1949, the Council of Europe has concluded more than 160 international conventions and treaties, with a view to fostering international co-operation, establishing common European standards and harmonising the legislation of European states.
This trilingual edition, the first in German, English and French, gathers together the official versions of all those texts, as well their recent amendments and protocols elaborated between 1949 and 1998.
The three linguistic versions are presented on the same page for ease of comparison and study. The conventions are presented in the chronological order of their opening for signature by member states of the Council of Europe.
A truly up-to-date source of information, these two volumes gather all international treaties emanating from almost fifty years of intergovernmental co-operation.
Politicians, magistrates and judges, advocates and legal advisers, national and international civil servants, students and researchers now have at their disposal two unique and complete reference books.
These compendia are a practical tool, essential for anyone interested in the evolution of European international law.