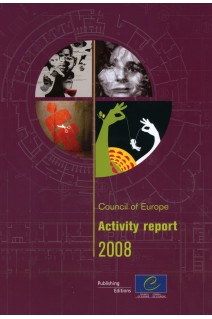 The year 2008 was very busy and eventful for the Council of Europe with, among other things, Kosovo's unilateral declaration of independence in February and the conflict that erupted during the summer between Georgia and Russia, two of the Organisation's member states.It also saw the adoption of the "White Paper on Intercultural Dialogue" and the gradual incorporation of its principles into the Organisation's activities. The public information campaign "Speak out against Discrimination" was launched in partnership with the media. There were also campaigns focusing on the death penalty, violence against women, Roma and children's rights. Another significant development was the entry into force of the Council of Europe Convention on Action against Trafficking in Human Beings.These are among the points dealt with in this report, which also covers the entire range of work carried out by the Organisation's different bodies in all its sectors of activity.