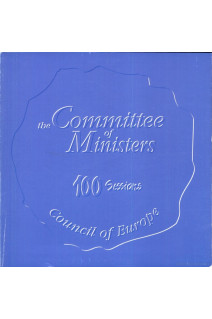 
 
"On 5 and 6 May 1997, when the Committee of Ministers of the Council of Europe meets for the one-hundredth time, my thoughts will be with the twelve ministers for foreign affairs who attended the first session in Strasbourg from 8 to 13 August 1949. That historic session was opened by Robert Schuman and chaired by Paul-Henri Spaak, two leading architects of European integration.

The fall of the Berlin Wall in 1989 signalled a new era also for the Council of Europe. Who could have imagined that, in the space of eight short years, our Organisation would embrace a new Europe, whole and free, of which Schuman and Spaak could only dream? Symbolic events provide an opportunity to look back, which is what this booklet invites us to do. But they also make us look to the future. In a few months' time, the heads of state and government will convene in Strasbourg for their second summit in the Council's history. The summit, prepared by the Committee of Ministers under my French colleague, will be an important event because our task it to strengthen our enlarged Organisation and to make it an efficient instrument in the creation of a truly democratic Europe."
Tarja Halonen