Democracy, Rule of Law and Foreign Policy (Science and technique of democracy No. 33) (2003) 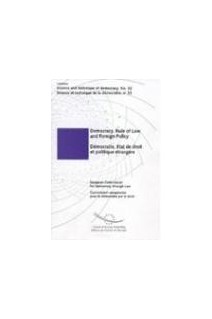 
 
Foreign policy unquestionably serves the national interest in the broadest sense. However, nowadays it is no longer left entirely to discretion of governments. The legal foundation of foreign policy are made up both of rules of international law and rules of domestic law.
The seminar in Skopje was an initiative which permitted an exchange of views on this subject between representatives of different countries.
Table of contents:
Reports
1. Official opening speech: Democracy, Rule of Law and Foreign Policy by Mr Todor Dzunov
2. Political ethics and foreign policy: how Macedonians internalise the relationship by Mr Dimitar Mircev
3. The politician, the diplomat and the people: Macedonain foreign policy experiences by Mr Denko Maleski
4. La répartition des rôles et des relations institutionnelles dans le contexte de la politique étrangère de Mme Hélène Tourard
5. Constitutional competences of the state organs in the conclusion, ratification and execution of international agreements by Mr Josif Talevski and Mr Simeon Petrovski
6. Review of acts of foreign policy: the role of the Constitutional Courts by Mr Igor Spirovski