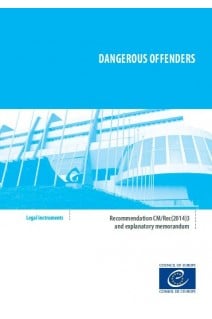 On 19 February 2014, the Committee of Ministers adopted Recommendation CM/Rec(2014)3 to member States concerning dangerous offenders. The main objective of the recommendation is to strike the right balance between the protection of public safety and the rights of offenders, particularly in relation to secure preventive detention. These considerations have been given further weight thanks to several European Court of Human Rights judgments.

The recommendation defines the concept of a “dangerous offender” with a view to characterising more precisely this group of offenders and also considers how best to recommend their management and treatment.

The recommendation acknowledges and promotes the idea that protecting the public from dangerous offenders must be carried out while respecting the fundamental rights of dangerous offenders and established legal guarantees. It also aims at establishing rules for the preparation of their release, which is important not only for the prisoner but for the protection of society, as it diminishes the risk of reoffending or recidivism.

The recommendation is a useful text and a reference for governments, lawmakers, all relevant authorities, professionals, non-governmental organisations and associations which deal with dangerous offenders, as well as for the offenders themselves.