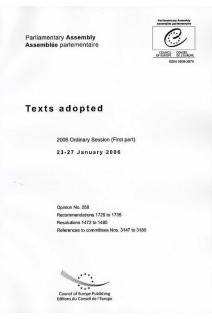 
 
This part-volume brings together all the texts adopted by the Parliamentary Assembly during the first part of the 2006 Ordinary Session (23-27 January 2006). The Assembly meets four times every year (January, April, June and October).The Assembly can adopt three different types of texts: opinions, recommendations and resolutions.Opinions are mostly expressed by the Assembly on questions put to it by the Committee of Ministers, such as the admission of new member states to the Council of Europe, but also on draft conventions, or the budget.Recommendations contain proposals addressed to the Committee of Ministers, the implementation of which is within the competence of governments.Resolutions embody decisions by the Assembly on questions which it is empowered to put into effect or expressions of views for which it alone is responsible. They can also be addressed to national parliaments.References to committees: the Bureau of the Assembly decides whether communications - in particular from the Committee of Ministers and from the Secretary General - and motions for recommendations and resolutions should be referred to the appropriate committee for action, if any. Referrals are then ratified by the Parliamentary Assembly.The Parliamentary Assembly's publications include, among others, the Officiai report of debates, Assembly documents and Orders of the day and minutes of proceedings.