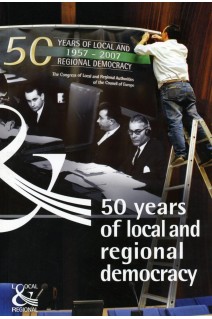 In 2005 the Council of Europe celebrated the 20th anniversary of the European Charter of Local Self-Government which was a major event for all those committed to the values of local...
Price 10.00 € / 15.00 $US
 Quick view

In 2005 the Council of Europe celebrated the 20th anniversary of the European Charter of Local Self-Government which was a major event for all those committed to the values of local...
Price 10.00 € / 15.00 $US
 Quick view