PDF - The participation of minorities in public life (Science and technique of democracy No. 45) (2011) 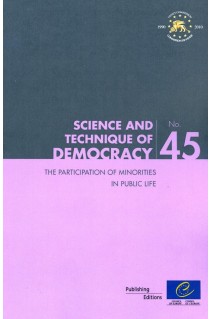 Can national minorities' participation in decision-making processes be achieved in any constitutional context ? Can developing international standards assist governments in devising national policies? What are the challenges if states are to use cultural autonomy to improve minority participation? This publication presents The UniDem Seminar on "The participation of minorities in public life", which took place in Zagreb on 18 and 19 May 2007, discussed ways of answering these topical questions.This publication contains the reports presented and discussed at the UniDem Seminar organised by the European Commission for Democracy through law (the Venice Commission), under the patronage of the President of the Republic of Croatia and in cooperation with the Ministry of Foreign Affairs and European Integration of the Republic of Croatia, the University of Zagreb and the University of Glasgow.

Constitutional non-recognition of minorities in the context of unitary states: an insurmountable obstacle?

Territorial solutions for managing diversity and their changing role

Special measures to promote minority representation in elected bodies: the experience of the OSCE High Commissioner on National Minorities

The revival of cultural autonomy in certain countries of eastern Europe: were lessons drawn from the inter-war period?

Personal autonomy through the "communities" system: does the example of Belgium suggest that forms of non-territorial autonomy can make a difference in terms of minority participation?

The reappearance of an old model: cultural autonomy

PDF - The participation of minorities in public life (Science and technique of democracy No. 45)