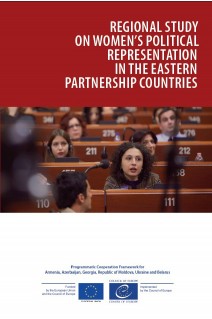 Gender equality is central to the protection of human rights and the functioning of democracy. It cannot be right that the experiences, skills and concerns of women are not fully represented or reflected in decision making about the laws and functioning of the societies in which they live.

Researchers based in each of the countries have contributed qualitative information on both the situation of women and on the experiences of women who have stood for elected office.

While the legal basis for equality of women and men exists in all the countries in question, the reality is quite different. Stereotypical views and assumptions about the roles of women in society affect how women step forward as candidates, and whether they are selected and elected.

The Council of Europe is convinced that this study, by providing examples of good practice and evidence-based, practical recommendations, will help to address the current imbalance of women holding elected office and, by doing so, will enhance democracy and human rights in the countries of the Eastern Partnership.

ACKNOWLEDGEMENTS
SUMMARY
INTRODUCTION
Reasons for the project
Aim of the study
Areas for the study
Reasons for focusing on these selected factors
CHAPTER 1 - METHODOLOGY
Choice of the methodology
CHAPTER 2 - CURRENT SITUATION OF WOMEN’S REPRESENTATION IN POLITICAL LIFE IN THE EAP REGION
Comments from election observations
Gender policies and action plans
CHAPTER 3 - FINDINGS OF THE STUDY
A. Economic, social and cultural factors
B. Political factors
C. Legal framework
D. Supportive measures
CHAPTER 4 - CONCLUSIONS
CHAPTER 5 - RECOMMENDATIONS
Country specific
All countries
BEYOND THE FRAME
APPENDIX 1 - QUESTIONNAIRE ON THE CONTEXTUAL NARRATIVE OVERVIEW PER EAP COUNTRY
APPENDIX 2 - TEMPLATE FOR INTERVIEWS

Equality between women and men (2016)

Gender equality is central to the protection of human rights, the functioning of democracy, respect for the rule of law, and economic growth and competitiveness. The Council of Europe’s...
Price Free
More info
 Quick view

Achieving gender mainstreaming in all policies and measures (2016)

Council of Europe Gender Equality Strategy Gender mainstreaming is not an end in itself, but an instrument towards the ultimate goal of achieving equality between women and men. In...
Price Free
More info
 Quick view

One of the five objectives of the Council of Europe Gender Equality Strategy for 2014-2017 is to work with member States towards guaranteeing equal access of women to justice in order to...
Price Free
More info
 Quick view

The Council of Europe seeks to combat gender stereotypes, sexism and violence against women in its many forms. It aspires to change mentalities and attitudes, promote balanced...
Price Free
More info
 Quick view