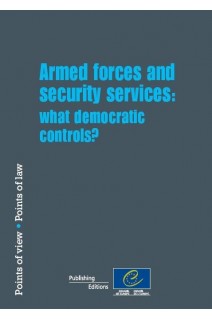 Faced with the growing threats of terrorism and international organised crime, European societies are feeling an increasing need for both domestic and external security.Government action to combat these threats must be lawful - and also legitimate - and be conducted with due respect for human rights, democracy and the rule of law, which are fundamental Council of Europe principles. The question arises as to who is going to exercise democratic oversight in this area. What are the roles of parliaments, the executive, the judiciary and civil society ? Do supervisory bodies exist at supranational level ?This book presents the various players and their duties in the security field and confirms the need to strike a balance between a democratic conception of fundamental freedoms and security safeguards, on the basis of reports by the Council of Europe Parliamentary Assembly and the European Commission for Democracy through Law.

I. Introduction
II. The scope of the study
III. The necessity for democratic control of the armed forces
IV. The role of the armed forces in Council of Europe member states
V. Actors, acts, moments and procedures of control
VI. Conclusions

Appendices
Appendix A: Overview of national legislation on the authority to decide participation in missions abroad
Appendix B: Overview of the constitutional rules of appointment of top commanders in selected Council of Europe member states
Appendix C: Overview of civil and political rights for armed forces personnel: selected examples