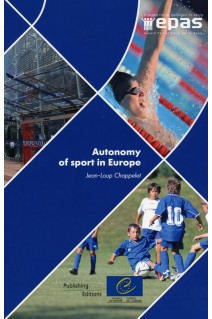 Given the impact that successive court rulings have had on the organisation of the sports movement in the past 15 years, the autonomy of non-governmental sports organisations has become a highly topical concern in Europe. It is also closely related to the issue of governance, the subject of previous Council of Europe studies.The Enlarged Partial Agreement on Sport (EPAS) decided to explore the concept of autonomy in greater depth by studying the conceptual, political, legal, economic and psycho-sociological aspects of the subject. This study was carried out at the request of the EPAS by the Swiss Graduate School of Public Administration (IDHEAP) on the basis of a questionnaire sent to public authorities in charge of sport and to national and international umbrella sports organisations.In addition to an analysis of the data obtained, documents produced by public authorities and sports organisations on this emerging issue are presented. This study contributes to a better understanding of the concept of autonomy and offers a clear picture of the issues involved.

3. Analysis of replies to the ERAS questionnaire on autonomy in sport
The public sports authorities' point of view
The sports organisations' point of view

Appendices
Appendix 1: ERAS questionnaire on autonomy in sport in Europe
Appendix 2: Working document and Resolution No. 2 on autonomy in sport adopted by the 11th Council of Europe Conference of Ministers responsible for Sport, Athens,
10-12 December 2008
Appendix 3: Chronological study of the Olympic Charter and a selection of documents issued by sports organisations with regard to the concept of autonomy

PDF - Autonomy of sport in Europe