PDF - Second Additional Protocol to the Convention on Cybercrime on enhanced co-operation and disclosure of electronic evidence (CETS No. 224) (2022) 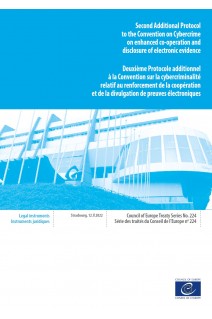 
 
“Cybercrime is growing and changing at an increasing rate. It disrupts everything from businesses to hospitals to the critical infrastructure we all depend on. Today, we are making a major contribution to the worldwide effort to fight online crime. The Second Protocol brings the Budapest Convention up to date with current, technological challenges, so that it remains the most relevant and effective international framework for combating cybercrime in the years ahead. It is the gateway to a safer, more secure future”
(Marija Pejčinović Burić, Secretary General of the Council of Europe)

The Second Additional Protocol to the Convention on Cybercrime (Budapest Convention), on enhanced co-operation and disclosure of electronic evidence, was opened for signature on 12 May in Strasbourg, France. With the Second Additional Protocol a more effective criminal justice response to the question of cybercrime (attacks against and by means of computer systems) is expected, as well as to any crime that involves electronic evidence.

Convention on Cybercrime and Protocol to the said Convention - Council... (2011)