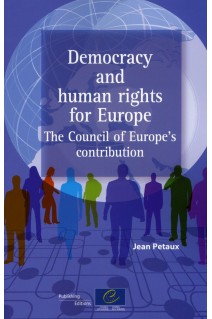 Over 800 million Europeans can individually obtain a ruling from a European court against their State if it has violated their human rights. There is an assembly in Strasbourg where members of the Icelandic, Russian, Portuguese, German, Georgian and other European parliaments all sit together. A Congress exists whose sessions are attended by representatives of 200 000 local and regional authorities of Europe... All these statements relate to the Council of Europe, the first of the European institutions to be founded. Now 47 member states strong, the Council - which is to celebrate its 60th anniversary this year - has become one of the main institutions of intergovernmental co-operation.This book looks at the political role of the Council of Europe, which is now not only a forum for democracy and a gage of stability, the home of human rights and the forum of cultural diversity, but also the crucible of Europe and the future for politics. The author examines all that is specific to the Council of Europe within the European architecture, particularly vis-à-vis the European Union. This book is essential reading for anyone wishing to study the Strasbourg-based Council of Europe, understand how it operates and find out about the contribution that it makes.

Introduction
Words to say it, an institution to do it
A question of words: politics/politique and role
A question of aims: Europe's values
A question of instruments: standard-setting texts
A question of custom: seeking Europe's identity - And saving its soul?
Some problems - And how the Council may help to solve them

Part I - Forum for democracy, gage of stability

Chapter 1 - An institution born of history - And compromise
1. Blueprints for union - Bordeaux 1940, The Hague 1948
2. Compromise in London: the treaty of 5 May 1949
3. From paper to practice: striking the right balance
4. Develop, diversify, expand
5. Point of departure: building on compromise

Chapter 3 - Grass-roots Europe: garden of delights - And seedbed of democracy
1. The Congress: "Act local, think European"
2. Broadening and deepening: the tension behind the democratic ideal

Chapter 2 - Europe right side out: culture at the heart and cultural diversity at the head
1. The European Cultural Convention: a policy of audacity
2. The defence of diverse cultures and protection of the heritage
3. The response to the instrumentalisation of culture

Part III - The crucible of Europe and the future for politics

Chapter 1 - The Council of Europe and the European Union: a new and vital synergy
1. The stork and the cuckoo: the ambiguities of a common ancestry
2. The institutional aspect of relations with the European Union
3. Stronger partnerships, effective but sometimes too low-profile

Chapter 2 - The Council of Europe: regenerating a Europe stuck in the mud
1. Remembering tragedies to gain release from them
2. Taking a chance on citizens and following different approaches (European Pharmacopoeia, Eurimages, etc.): a long-standing practice of enhanced co-operation
3. Playing a full political role and putting Europe on the world map