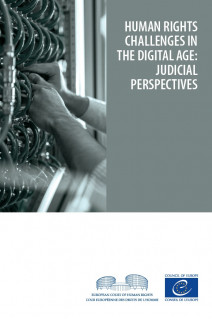 Mass surveillance - Who is watching the watchers? (2016)

Protocol amending the Convention for the Protection of Individuals with... (2018)

The Protocol updates Convention 108, the only legally binding global instrument on the right to personal data protection. The Protocol aims to solve the problems posed, particularly...
Price 8.00 € / 16.00 $US
 Quick view

The rapid development of information technology has exacerbated the need for robust personal data protection, the right to which is safeguarded by both European Union (EU) and Council of...
Price Free
 Quick view

European Ethical Charter on the use of artificial intelligence in... (2019)

The European Commission for the Efficiency of Justice (Cepej) of the Council of Europe has adopted on 4th December 2018 the first European text setting out ethical principles relating...
Price Free
 Quick view

The unimpeded, transboundary flow of information on the Internet is critical for the full realisation of the right to freedom of expression online and for safeguarding pluralism and...
Price Free
 Quick view