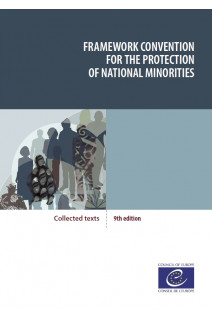 
 
The protection of national minorities is a core issue for the Council of Europe, and one of the major achievements in this field is the Framework Convention for the Protection of National Minorities. The entry into force of the Framework Convention on 1 February 1998 was indeed an event of universal stature, for it is the first ever legally binding multilateral instrument devoted to the protection of national minorities in general. Its importance is widely acknowledged, and the number of ratifications is impressive.

The aim of this collection is to provide all those interested in the protection of national minorities with a userfriendly compilation of the basic texts concerning the Framework Convention. In addition to the Framework Convention and its explanatory memorandum, the collection contains texts pertaining to the monitoring mechanism in general and the Advisory Committee in particular. It further provides the state of signatures and ratifications as well as declarations and reservations.
INTRODUCTION
FRAMEWORK CONVENTION FOR THE PROTECTION OF NATIONAL MINORITIES
EXPLANATORY REPORT
RESOLUTION CM/RES(2019)49
RULES OF PROCEDURE
MONITORING CYCLE OF THE FCNM
SIGNATURES AND RATIFICATIONS
RESERVATIONS AND DECLARATIONS FOR TREATY NO.157

With a focus on developments following the end of the cold war, this publication, the first in the Handbook on Minority Issues series, offers a comprehensive and critical overview of the...
Price 39.00 € / 59.00 $US
 Quick view

National minorities. An abstract term which evokes the complex realities of those persons who, because of history, have a specific background and identity. With this book, we are here...
Price 23.00 € / 46.00 $US
 Quick view

The participation of minorities in public life (Science and technique of... (2011)

Can national minorities' participation in decision-making processes be achieved in any constitutional context ? Can developing international standards assist governments in devising...
Price 19.00 € / 38.00 $US
 Quick view

National minority standards - A compilation of OSCE and Council of... (2007)

The Organization for Security and Co-operation in Europe (OSCE) and the Council of Europe, guided by the same values and with similar goals and sharing similar challenges, have...
Price 25.00 € / 38.00 $US
 Quick view

Mechanisms for the implementation of minority rights (2005)

This publication offers a comprehensive and critical overview of the political and legal mechanisms that are available at both European and international levels for the implementation of...
Price 39.00 € / 59.00 $US
 Quick view

This book presents an account and an evaluation of the principal standards and mechanisms created by the Council of Europe and other international organisations to protect minorities. The...
Price 53.00 € / 80.00 $US
 Quick view