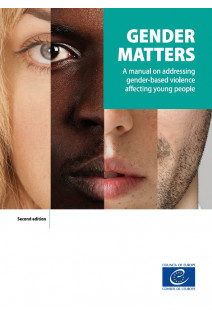 Gender-based violence refers to any type of harm that is perpetrated against a person or group of people because of their actual or perceived sex, gender, sexual orientation and/or gender identity. Gender-based violence can be sexual, physical, verbal, psychological (emotional), or socio-economic and it can take many forms – from verbal violence and hate speech on the internet, to rape or murder. Statistics show that gender-based violence affects women disproportionately.

Gender-based violence undermines the core values of human rights on which the Council of Europe is based and to which its member states have subscribed. It is a problem in all member states and affects millions of women and men, young people and children, regardless of their social status, cultural or religious background, sexual orientation or gender identity.

Preventing, addressing and combating gender-based violence are intrinsic to human rights education, youth work and non-formal learning activities which support young people on their path to autonomy as active citizens, mindful of everyone’s human rights. The issues that are addressed through this work are all relevant to young people’s lives, and they relate directly to the world in which young people live.

Gender Matters should be used as a practical resource in guiding young people to become more aware of their own actions and the actions of others. It contributes to a better understanding of how to stay safe and secure and how to support those who have experienced violence in their lives. It will not suffice to eradicate gender-based violence. However it is a necessary and urgent step towards dignity for all.

Introduction to this edition

Chapter 2 Activities to address gender and gender-based violence with young people
Educational approaches and guidance for facilitators
Overview of the activities
About Maria
Digital media bash
Gender confusion
Gender-in-a-box
Good, better, best
Greater expectations?
The impact of gender-based violence
Kati’s story
The Knight in Shining Armor
N vs Sweden
No violence here
Our daily sexism
Safety in my life
Sex sells?
Spaces and places
Stella
Too hard to respond
What to do?

Glossary
of terms related to gender and gender-based violence

The 1950 European Convention on Human Rights is crucial for the definition of the rights of lesbian, gay and transgender persons. The European Court of Human Rights has enshrined these...
Price Free
 Quick view

Discrimination on grounds of sexual orientation and gender identity in... (2011)

Many people in Europe are stigmatised because of their sexual orientation or gender identity and cannot fully enjoy their universal human rights. Some of them are victims of violence,...
Price 9.00 € / 18.00 $US
 Quick view

Break the silence on domestic violence (2008)

In present-day Europe, thousands of women have to cope every day with acts of physical, sexual or psychological violence, even in their own homes. "It starts with screams and must never...
Price 28.00 € / 56.00 $US
 Quick view

The Council of Europe Convention on Preventing and Combating Violence... (2014)

This guide, produced jointly by Amnesty International and the Council of Europe, aims at helping design policies and measures to better address female genital mutilation and to pave the...
Price 15.00 € / 30.00 $US
 Quick view

Council of Europe Convention on Preventing and Combating Violence... (2012)

The Convention on Preventing and Combating Violence against Women and Domestic Violence (CETS No. 210) is the first legally binding instrument to address violence against women and...
Price 8.00 € / 16.00 $US
 Quick view