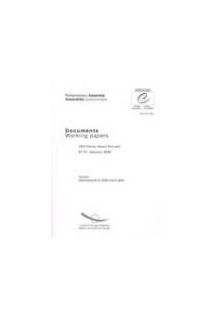 
 
Volumes I and II of the Documents bring together all the documents presented to the Parliamentary Assembly of the Council of Europe at the first part of the 2003 Ordinary Session (27-31 January 2003).
The Assembly meets four times every year (January, April, June and September).

The Parliamentary Assembly's publications include, among others, Adopted texts, the Official report of debates, and Ordres of the day and minutes of proceedings.