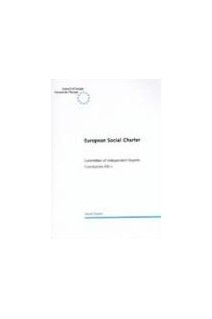 
 
The Committee of Independent Experts, first of the four bodies responsible for supervising the implementation of the European Social Charter, examines the national reports of the Contracting Parties and adopts on this basis conclusions in which it indicates if it considers that during the period of report, each of the Contracting Parties has conformed to provisions included in the report.
The first part of this volume contains the Committee's conclusions on the reports submitted for the period 1995 by Finland, by Luxembourg (only Articles 7, 8, 11, 14, 17 et 18) and by Portugal on the application of the Charter, as well as the conclusions on the reports by Finland, Italy, the Netherlands, Norway and Sweden on the 1988 Additional Protocol of the Charter.
The second part of these Conclusions comprises a table indicating the position of each Contracting Party having reported during cycle XIII-5, as well as tables showing details of acceptance of the various provisions of the European Social Charter and of the Additional Protocol of 1988.