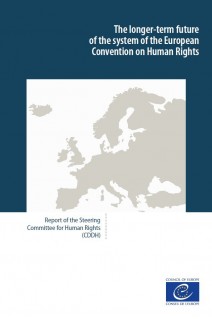 What are the present and future challenges to the longer-term future of the system of the European Convention on Human Rights? How should they be addressed?

This report is the result of the intergovernmental work undertaken throughout the biennium 2014-2015 by the Steering Committee for Human Rights (CDDH) and its subordinate bodies, the Committee of Experts on the Reform of the Court (DH-GDR) and its Drafting Group “F” on the Reform of the Court (GT-GDR-F), in response to paragraphs 35. c to 35.f of the Brighton Declaration.

In order to think outside the box and carry out a comprehensive analysis of the whole Convention system, a number of particularly innovative working methods have been adopted. Seven independent external experts have been involved in all of the preparatory work. An open call for contributions was launched throughout Europe and ad hoc experts from academia and civil society contributed to the work, with additional input from the Conference on the long-term future of the Court, organised by the PluriCourts academic network in Oslo in April 2014. The report also reflects the work carried out in other bodies of the Council of Europe and considers the follow-up to be given to the Brussels Declaration (27 March 2015) on “the implementation of the European Convention on Human Rights, our shared responsibility”.

The challenges inherent in each of these fields are identified, along with the responses to be given by all actors in the Convention system.