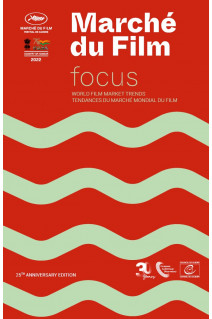 The European Audiovisual Observatory’s FOCUS – World Film Market Trends publication is a one stop shop handbook on all the trends and tendencies in the global film industry. This easily readable 68-page report gives you key statistics for the global cinema market, EU28 (European Union plus the UK) as well as individual country profiles. If you want to get the cinema admission figures for Spain, the price of a cinema ticket in South Korea or the top ten films watched in Brazil, then FOCUS is for you!

The European Audiovisual Observatory produces a new FOCUS report each year in May for the Cannes Marché du Film. It is distributed to all Film Market participants as a must-have information resource. And now you too can get it! This year’s edition marks the 25th anniversary of FOCUS and contains special reporting on the recovery rate of world cinema markets from the COVD-19 pandemic which had dramatic consequences for this sector. How are the world cinema markets coping? Get FOCUS 2022 and find out!
Introduction
World
Europe
Europe 28
France
Germany
Italy
Spain
United Kingdom
Russian Federation
Poland
Turkey
Other Western Europe
Nordic Countries
Baltics and Central Europe
South-Eastern Europe
Americas
North America
Latin America
Australia and New Zealand
Asia
China
Japan
India
South Korea
Other Asia
Africa
Middle East
Sources