Ireland and the Council of Europe - From isolation towards integration (2000) 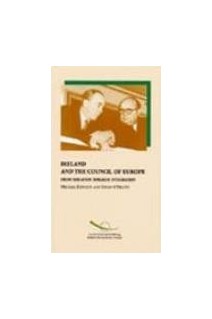 
 
The Council of Europe has played a central but neglected role in the definition of Irish attitudes to European integration. This book, using newly released material from the archives of the Department of Foreign Affairs and the Council of Europe, charts in detail for the first time Ireland's involvement in the oldest of the post-second world war European institutions. Ireland was a founder member of the Council in 1949, and ever since her politicians and diplomats have actively embraced its work and mission, most significantly in the field of human rights.
The authors argue that the Council provided an environment in which Ireland could, after wartime neutrality, cautiously explore the emerging possibilities of European integration.
The book explores the differing views of politicians such as Eamon de Valera, Sean MacBride and Sean Lemass on European integration, and examines the changing opinions of Irish academics, businessmen, civil servants and diplomats in the period from the late 1940s to the early 1960s. It shows Ireland's early acceptance, despite sensitivity about ceding sovereignty, that the codification and defence of the fundamental human and democratic rights of Europe's citizens was the necessary bedrock on which further European integration would rest.
The book offers important insights into Irish attitudes towards Europe and on Irish foreign policy in the second half of the twentieth century.