PDF - Cyberterrorism - The use of the Internet for terrorist purposes (2008) 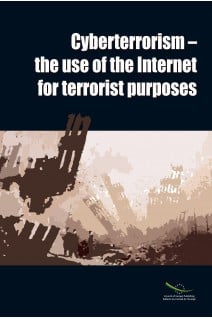 Cyberterrorism and the misuse of Internet for terrorist purposes represents a serious threat, since many essential aspects of today's society are completely dependent upon the functioning of computer systems and the Internet. Further to the adoption by the Council of Europe of the Cybercrime Convention (2001) and the Convention on the Prevention of Terrorism (2005), its Committee of Experts on Terrorism (CODEXTER) has been studying this matter and surveying the situation in member states to evaluate whether existing legal instruments are sufficient to combat this emerging form of crime. This publication contains an expert report prepared by the Max Planck Institute, which evaluates the main problems that arise in the context of cyberterrorism and provides recommendations, together with reports on the situation in the member and observer states of the Council of Europe and the relevant Council of Europe conventions.

Selected Council of Europe reference texts
Council of Europe Convention on the Prevention of Terrorism (CETS No. 196)
Explanatory Report
European Convention on Cybercrime (ETS No. 185)
Explanatory Report
Parliamentary Assembly Recommendation 1706 (2005) on media and terrorism
Parliamentary Assembly Recommendation 1565 (2007)
How to prevent cybercrime against state institutions in member and observer states