PDF - Living together. Combining diversity and freedom in 21st century Europe - Report of the Group of Eminent Persons of the Council of Europe (2011) 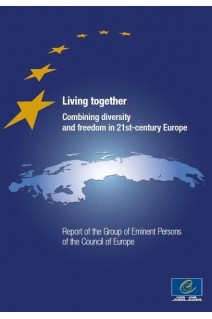 In the summer of 2010, the Council of Europe's Secretary General, Thorbjørn Jagland, asked an independent "Group of Eminent Persons" (the Group) to prepare a report on the challenges arising from the resurgence of intolerance and discrimination in Europe. The report assesses the seriousness of the risks, identifies their sources and makes a series of proposals for "living together" in open European societies.The report is divided into two parts: "The threat" and "The response".In the first part, the Group identifies eight specific risks to Council of Europe values: rising intolerance; rising support for xenophobic and populist parties; discrimination; the presence of a population virtually without rights; parallel societies; Islamic extremism; loss of democratic freedoms; and a possible clash between "religious freedom" and freedom of expression. Behind these risks, it suggests, lie insecurity (stemming from Europe's economic difficulties and sense of relative decline); the phenomenon of large-scale immigration (both as actually experienced and as perceived); distorted images and harmful stereotypes of minorities in the media and public opinion; and a shortage of leaders who can inspire confidence by articulating a clear vision of Europe's destiny.In the second part, the Group begins by setting out 17 principles which it believes should guide Europe's response to these threats, starting with the statement that "at a minimum, there needs to be agreement that the law must be obeyed, plus a shared understanding of what the law is and how it can be changed". It then goes on to identify the main actors able to bring about the necessary changes in public attitudes: educators, mass media, employers and trade unions, civil society, churches and religious groups, celebrities and "role models", towns and cities, member states, and European and international institutions. In most of these categories, the report includes short pen portraits of particular groups or individuals whose work the Group finds "commendable and worthy of emulation". The report then concludes with 59 "proposals for action", the first 17 of which are labelled "strategic recommendations", while the remainder, "specific recommendations", address mainly the European Union, the Council of Europe, and their member states.