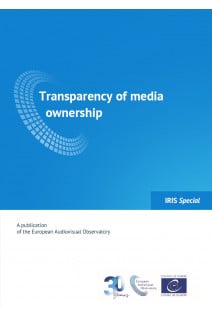 
 
This publication aims at providing some clarity about how the transparency of media ownership is regulated in Europe.

Mass media are said to have a watchdog role, that is, they investigate, fact-check, interview, in order to publish curated information that hold the rich and powerful accountable. Beyond that, in the words of John Reith, General Manager of the BBC from 1922 to 1939, they also play a role of educating and entertaining the public. All of these are fundamental functions in today’s screen-obsessed society.

Now, we could ask ourselves, like the Roman poet Juvenal did: quis custodiet ipsos custodes, which translates for our purposes as who watches the watchdogs themselves? Or said otherwise: who keeps the media from using their preeminent position for spurious purposes? To this question, the given answer could be ‘civil society, regulatory authorities and, ultimately, the courts of law’. And yet, it is a bit difficult to watch the watchdog when you do not know who really the watchdogs are. Who are the persons, natural or legal, that own the media? Who are the real decision-makers when it comes to, let’s say, the editorial line of a newsroom? If we agree, for example, that an unhealthy level of media concentration can threaten democracy and freedom of expression, then transparency of media ownership is fundamental for our societies.
1. Introduction
2. Rules on transparency of media ownership in light of EU primary law
2.1. Introduction
2.2. Transparency as a constitutional principle of the EU?.
2.3. Article 345 TFEU and transparency rules
2.4. The influence of transparency rules on EU competition policy
2.5. The influence of transparency rules on the EU’s fundamental freedoms
2.6. Transparency rules and EU fundamental rights
2.7. Transparency as an instrument for safeguarding media diversity
2.8. Conclusion
3. Secondary law provisions on media ownership transparency
3.1. The AVMSD
3.2. Transparency in other secondary law and self-regulatory provisions
3.2.1. EU Anti-Money Laundering Directive
3.2.2. Transparency provisions in media-relevant secondary law and self-regulation
3.2.3. Transparency for the future in the AI field and the Digital Services Act package
4. Media ownership transparency initiatives
4.1. Council of Europe
4.2. Existing databases and civil society initiatives
5. Country reports
5.1. CH - Switzerland.
5.2. DE - Germany
5.3. ES - Spain
5.4. FR - France
5.5. GB - United Kingdom
5.6. IE - Ireland
5.7. IT - Italy
5.8. PL - Poland
5.9. RU - Russian Federation
6. Comparative analysis
6.1. Introduction
6.2. Media ownership transparency in constitutional law
6.3. Media ownership transparency rules in domestic law
6.3.1. Providers subject to regulations
6.3.2. Scope and content of the rules
6.3.3. Disclosure methods
6.3.4. Supervision and monitoring of the rules
6.3.5. Penalties and legal consequences
6.4. Outlook
7. Conclusions

Freedom of expression is one of the basic conditions for the progress of society. Without safeguards for the safety of journalists there can be no free media. Journalists are...
Prix 19,00 € / 38.00 $US
 Aperçu rapide

An invaluable resource for students of law, politics, international relations and technology as well as for diplomats and civil society actors, this publication demonstrates how the...
Prix 29,00 € / 58.00 $US
 Aperçu rapide

One of the pillars of freedom of expression in the audiovisual sector is media pluralism. This concept covers, on the one hand, the availability of a variety of choice in the programming...
Prix 7,00 € / 7.00 $US
 Aperçu rapide

Information disorder: Toward an interdisciplinary framework for research... (2017)

Media freedom, regulation and trust - A systemic approach to information... (2020)

Could the fundamental reforms of media governance discussed in Council of Europe member states turn out to be worse than the problems encountered, such as online disinformation, hate...
Prix Gratuit
Plus d'infos
 Aperçu rapide

European governments should show stronger political will to protect press freedom This annual report of the Platform for the Protection of Journalism and the Safety of Journalists,...
Prix Gratuit
Plus d'infos
 Aperçu rapide