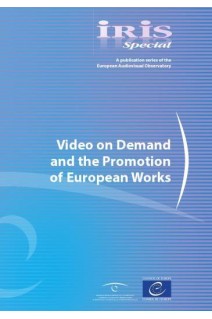 Films and TV programmes in Europe are now, more than ever before, fighting for market share faced with the onslaught of successful content from the States and other countries. The rise in the on-demand content market has meant that, potentially, a new channel for promoting European works now exists via the various on-demand services. But how has Europe incorporated these on-demand services and their potential into its legislation? Our new IRIS Special report asks this very question.

The first chapter, entitled Existing promotion obligations imposed on On-demand audiovisual services in selected countries, focuses on the various legal measures such as compulsory financial contributions from SPs, quotas according to nationality or language, or prominence requirements in terms of layout and presentation of content which aim at promoting works on-demand in 5 countries (Italy, Slovakia, France, the Netherlands and Belgium). Major differences in national ways of applying the overarching AVMSD soon become apparent…

The second chapter - Challenging Principal Assumptions that underpin the promotion of European works in on-demand services - takes a critical look at current legal measures aimed at boosting European works via on demand services. Are they keeping up with the pace of developments? Models of consumer behaviour are examined using the Dutch example. We also look at the thorny issue of less stringent regulations in certain EU countries chosen for the headquarters of international companies such as Netflix and Google. The report points to the possible distortion of competition caused by "the presence of less regulated foreign competitors" in the European VoD market.

The final chapter is useful summary of the Observatory's workshop on promoting European Works in On-Demand Audiovisual Media Services which took place last spring in Amsterdam and which provided the basis for this report. The workshop brought together the Observatory's partner organisations as well as a dozen notable legal and industry experts in the VoD field.