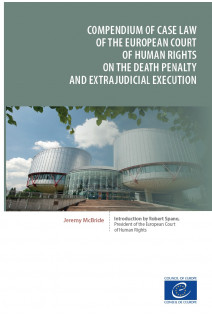 The compendium’s aim is to assist national judges, prosecutors and lawyers from the 46 member states of the Council of Europe to deal with extradition or deportation cases when there is a risk of the death penalty being imposed in third countries or of extrajudicial execution. It also aims at enabling legal professionals from countries where the death penalty still exists to develop arguments based upon the reasoning of the case law of the European Court of Human Rights. It contains relevant extracts from the Court’s case law, structured in a user-friendly way.

Jeremy McBride is a Barrister at Monckton Chambers, London, specialising in cases before the European Court of Human Rights and the United Nations Human Rights Committee. He is President of the Expert Council on NGO Law of the Council of Europe’s Conference of International Non-Governmental Organisations (INGOs), a former member and Chair of the Scientific Committee of the European Union’s Fundamental Rights Agency, and co-founder and Chair of the International Centre for the Legal Protection of Human Rights (INTERIGHTS).
FOREWORD
CHAPTER 1. INTRODUCTION
CHAPTER 2. PROVISIONS OF THE EUROPEAN CONVENTION ON HUMAN RIGHTS
CHAPTER 3. IMPOSITION OF THE DEATH PENALTY
CHAPTER 4. APPLICATION OF THE DEATH PENALTY
CHAPTER 5. SUBSTITUTION OF THE DEATH PENALTY BY LIFE IMPRISONMENT
CHAPTER 6. EXPULSION/EXTRADITION/REMOVAL/TRANSFER
CHAPTER 7. EXTRAJUDICIAL EXECUTION
INDEX OF CASES

Europe is today the only region in the world where the death penalty has been almost completely abolished. In the Council of Europe's 45 member states, including the European Union's 15...
Prix 28,00 € / 42.00 $US
 Aperçu rapide

Death is not justice Information from countries that have abolished the death penalty continually proves that there is no link between the death penalty and crime rates. Scientific...
Prix Gratuit
Plus d'infos
 Aperçu rapide