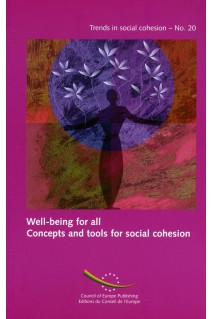 
 
The concepts of well-being for all and of responsibility borne by all are funda¬mental to the definition of social cohesion propounded by the Council of Europe and bring a new dimension to the ideas of freedom, choice and preference.All the articles in this volume come together to demonstrate the impor¬tance of not only the tangible but also the intangible dimensions of well-being, and more specifically, each person's recognition of their role as an actor in society. This recognition is piv¬otal for advancing processes conducive to well-being founded on mutual responsibility.The way in which responsibilities are apportioned probably contributes to the widening or maintenance of gaps between the sense of well-being and the material dimensions of well-being observed in modern societies.This volume tries to suggest ways in which we can develop inclusive and concerted opinions on the subject of well-being (taking into consideration common goods) as a tool for improving social cohesion.

Part IV - The case for a society focusing on the common good as a condition for well-being
From welfare state to welfare society
1.   Collective imagination and well-being: the two Utopias
2.   Welfare society as a new project for well-being
Conclusion: access to, and the use of, resources and rights
References

This guide proposes a method and tools for making the co-responsibility of public and private actors work, at the local, regional, national and European levels, for the welfare of all...
Prix 25,00 € / 38.00 $US
 Aperçu rapide

The question of young people from lower-income neighbourhoods is often on the political agenda, and the responses proposed vary according to circumstances and the social visibility of a...
Prix 30,00 € / 45.00 $US
 Aperçu rapide

This volume has two purposes. First, it looks at why migrant welfare is not always acknowledged as forming part of the general well-being of host countries. And second, by suggesting...
Prix 44,00 € / 88.00 $US
 Aperçu rapide

Rethinking consumer behaviour for the well-being of all - Reflections on... (2009)

This guide invites the reader to think about consumption as one factor in the difficult task of building cohesive, sustainable societies based on the principle of universal well-being....
Prix 28,00 € / 56.00 $US
 Aperçu rapide