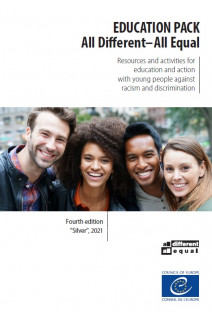 
 
It is easy to say, “I have no prejudices”, or, “I’m not racist, so it has nothing to do with me”. It is much harder to say, “I may not be to blame for what happened in the past but I want to take responsibility for making sure it doesn’t continue in the future”.

Many young people in Europe, and beyond, defied the pandemic and took to the streets in 2020 to express their sorrow and their anger in the aftermath of George Floyd’s death in Minneapolis at the hands of a white policeman. This also served as a wake-up call to the daily, systemic and sometimes structural forms of racial discrimination which are visible across Europe, expressed in hate speech or outright physical violence, and which target people on the basis of their characteristics or identity, including age, colour of skin, disability, ethnicity, gender, legal status, nationality, origin, “race”, religion and belief, sex and sexual orientation.

Youth leaders and human rights activists turned to the Council of Europe, the guardian of human rights in Europe, for responses, support and, in particular, what the youth sector could propose. A consultation with youth workers and specialists in human rights education concluded that part of the response has to be educational. The rise of populist, nationalist and xenophobic ideas and discourse must also be countered through democratic citizenship and human rights education, including anti-racism education and intercultural learning. Education remains an important antidote to racism and prejudice.

This manual was originally produced in 1995 for the European youth campaign against racism, antisemitism, xenophobia and intolerance. It has been updated and extended to reflect the kaleidoscope of racial discrimination in Europe today and the mutations of racist discourses and ideologies. It contains basic information and hands-on non-formal education methodologies for supporting young people in learning about and addressing prejudice and its impact on people and societies.
Acknowledgements
Preface
Introduction
All Different - All Equal today

Children are young citizens of the present, living in the 'here and now', rights holders and competent in many issues related to their lives. Human rights education aims to establish...
Prix 28,00 € / 56.00 $US
 Aperçu rapide

A professional development programme for teachers, designed to support and promote the teaching of controversial issues in schools in Europe. This publication offers practical...
Prix 23,00 € / 46.00 $US
 Aperçu rapide

Learning how to handle controversial issues in schools and other... (2021)

Learning how to deal with controversial issues is at the heart of education for democratic citizenship and human rights education. Highlighting best practices from case studies across...
Prix 19,00 € / 38.00 $US
 Aperçu rapide

Human rights cannot be defended by legal measures alone. They need to be protected and safeguarded by everyone, including young people. Human rights are best respected and appreciated...
Prix 28,00 € / 59.00 $US
 Aperçu rapide

PDF - Bookmarks - A manual for combating hate speech online through... (2020)

This revised edition of Bookmarks reflects the end of the coordination of the youth campaign by the Council Europe. The campaign may be officially over, but the education and...
Prix 7,00 € / 15.00 $US
 Aperçu rapide